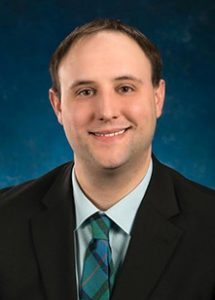 Having earned his Doctorate of Podiatric Medicine, Dr. Lewis then completed a three-year podiatric medicine and surgical residency with rearfoot and ankle credential at SSM DePaul Health Center in Saint Louis, Missouri. There, he received extensive training in elective and non-elective forefoot and rearfoot surgery, trauma, and diabetic foot care. Dr. Lewis also received advanced training in foot and ankle surgical techniques as part of a month-long immersion in European surgical departments in Germany. During his final year of residency, Dr. Lewis had the honor of serving as Chief Podiatry Resident as SSM DePaul Health Center.

Outside of the professional environment, Dr. Lewis enjoys traveling. He enjoys experiencing local culture and languages abroad, and has relished his visits to France, Germany, Italy, and Spain over the years. He also enjoys going to movies, the outdoors, and spending time with his friends, family and his 2 dogs. After nearly ten years away, Dr. Lewis is especially thrilled to be able to return to Pueblo and serve this wonderful community.