Description
Have you ever been on a subway car during rush hour? At each stop, about two people get off and at least twenty get on, packing their way into the car like sardines eager to get canned. Things get pretty snug inside that car, your elbow bumping into the small of someone else’s back, knees knocking into thighs, feet tangling with other feet. Now, imagine if someone on that very packed subway car started expanding like a balloon. Instead of just being uncomfortably snug, you’d get pretty darn squished as the ballooning person took up more and more space.

This is kind of like what happens in tarsal tunnel syndrome. The tarsal tunnel is a space in between your ankle bones and a thick ligament on the inside of your ankle called the flexor retinaculum. Through that space run tendons, arteries, veins and the posterior tibial nerve (which branches out once it exits the tarsal tunnel and supplies nerves for the entire bottom of your foot). Things are tight in the tarsal tunnel, and if anything starts taking up more space than it should, the other stuff gets squished, including the posterior tibial nerve. Varicose veins (they grow around the nerve and compress it), tendonitis (inflammation of a tendon), bone spurs, or soft tissue growths like ganglion cysts, fibromas or lipomas can swell in the tarsal tunnel space, compressing the nerve. Or, swelling could come from an injury (like an ankle sprain or a fracture) or diseases like diabetes and rheumatoid arthritis.

Actually, one of the most common causes of tarsal tunnel syndrome is when you have flatter feet than normal. This makes your heel tilt outward, which stretches the posterior tibial nerve and compresses the tarsal tunnel (kind of like what would happen if that subway car started shrinking). 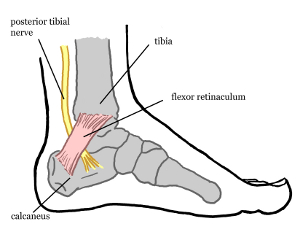 Symptoms
Tarsal Tunnel Syndrome If you get tarsal tunnel syndrome, you may experience tingling, burning or numbness anywhere from the inside of your ankle, down to your arch, and into the bottom of your foot. The sensation may feel like standing on pins and needles (never a good idea when packed in a crowded subway), shooting pain, or electric shocks.

The pain may be worse as the day goes on, but then go away when you finally get off the subway, put your feet up, give them a bit of a massage, and watch your favorite sitcom, all while eating rocky road ice cream, of course. (Actually, your whole body may feel better at that point.) In short, the pain may improve with rest and elevation.

Symptoms of tarsal tunnel syndrome may appear after you begin a new exercise program, or after prolonged periods of activity (like walking, or standing). However, once these symptoms appear, don’t put off going to your podiatrist (even if you have to take a subway to get there). Tarsal tunnel syndrome, if it goes on long enough, can result in permanent nerve damage.

Diagnosis
When you do make your way to the podiatrist’s office, he or she will examine your foot and may tap it to see if your symptoms can be reproduced, or your doctor might press around the tarsal tunnel area to determine if you’ve got an unusual growth in there. Swelling in the area may be obvious to a visual examination. You’ll also need to tell your podiatrist about your symptoms, such as when they started, what seems to make them worse, etc.

Your podiatrist may suggest an MRI to get a look at the soft tissues in the region to see if there’s a small mass in the tarsal tunnel, although it won’t show any damage to your nerve. If your condition fails to improve, your doctor may suggest electromyography or a nerve conduction velocity test to see how well your nerve is carrying electrical impulses.

Treatment
Treatment for your tarsal tunnel problem really depends on the cause of the condition. However, several things are likely to help. First of all, you’ll probably want to rest your foot as much as possible. If swelling in the area is your problem, your podiatrist may want to immobilize your foot using a cast or cast boot. You can also apply ice (20 minutes on over a thin towel, then at least 40 minutes off) to the region, and anti- inflammatory medications (either oral like ibuprofen, or an injected cortisone treatment) can also be helpful in reducing inflammation and pain. Physical therapy (ultrasound treatments or exercises) can also provide relief.

If an excessively flat foot seems to be causing the problem, your podiatrist may recommend orthotics (prescription shoe inserts), special supportive shoes, or a brace for your foot. However, if these treatments fail to improve your symptoms, then your podiatrist may recommend surgery to remove soft tissue growths if present, or to release a ligament compressing the nerve.

With proper treatment, your posterior tibial nerve should be able to get a little bit more breathing space, which should make things for you a lot easier, whether you’re stuck on the subway or not.