Description
There may be times in your life (say, after a severe ankle sprain, a broken bone, or surgery on your foot) when walking on one of your feet is just simply not an option. At times like this (since self-propelled exoskeletons haven’t really been fully developed yet), using crutches may be the best way to keep you mobile. You might use crutches to keep weight entirely off of one foot (and maintain your balance while doing so), or you might use them to support most of your weight while you stand up, sit down, or otherwise change positions. They may seem kind of intimidating and awkward at first, but with a little practice, you’ll be able to navigate your way around pretty well.

First off, you’ll want to get a pair of crutches that have rubber tips at the end (these give you a better grip on the ground as you walk around-slipping on crutches is not pleasant) and that are adjustable. (Those old-time crutches that look like a strange sort of branch (think Tiny Tim) are rustic looking, but won’t work nearly as well as the more modern sort.) Your podiatrist can recommend places for you to purchase your crutches. (In addition to being a savvy doctor, he or she is also a savvy shopper for medical supplies.)

Adjusting Your Crutches
When you get your new pair of crutches, the first thing you’ll want to do is adjust them so that they fit your height and body measurements. You’ll want to do this while standing, although you may wish to get extra balancing assistance from someone else. 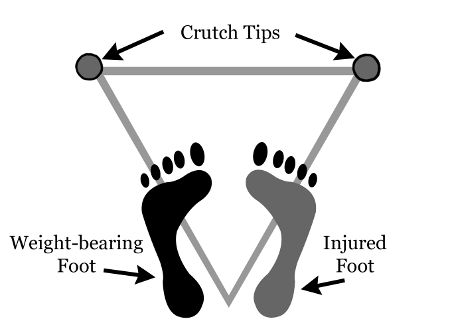 Walking
Beginning to walk with your crutches may seem tricky at first, but should become easier with practice.

Chairs
Getting up and down from chairs isn’t so bad. You’ll want a chair that’s stable, with nice back and arm rests to use as props. Also, avoid chairs with wheels on the bottom; crutches make them a bit skittish, and they tend to be evasive when you try to sit on them.

Tackling the Stairs
Stairs are probably one of the most difficult things to navigate while wearing crutches. (Unless, of course, you’re trying to climb a frozen waterfall with crutches. That’s extra and especially tricky, and is also NOT recommended.) But there are a couple of methods that should make it possible to get up and down safely.

The safest way might be to employ kids’ preferred method: going up and down on your bum. To start out, lower yourself onto one of the lower steps.

If climbing stairs on your rear end is simply unbearable, you can certainly try climbing with crutches. Always use the handrail. If there’s none available, you may have to resign yourself to the bum method. Also, if you can, try to rope someone into being your balance-aid as you go up and down the stairs. It’ll make you a bit safer, and will give them points for helpfulness: a win-win situation.

Once you’ve mastered these maneuvers, you’re pretty much good to go on the crutch-walking front. You may wish to hold off on marathons and dancing, of course, but, if you give your injured foot the rest it so badly needs, you’ll likely be able to get back to unaided walking soon. And as fun as crutches are, they’re no substitute for full mobility.